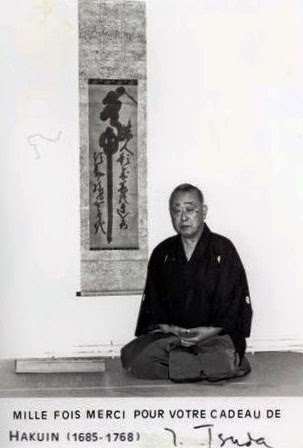 Tsuda was born on the 3rd of May, 1914 in Japanese-ruled Korea. When he was 16 years old, he defied his father, who wished for his eldest son to remain home and manage his family's estate. He left his family home and began wandering, searching for new philosophies that would free his mind.

Having reconciled with his father, in 1934 he went to France, where he studied with Marcel Granet and Marcel Mauss until 1940. When he went back Japan, he studied Noh with Master Hosada, Seitai with Master Haruchika Noguchi and Aikido with Master Morihei Ueshiba O-Sensei.

In 1970 Itsuo Tsuda came back to Europe to disseminate the regenerative movement (or katsugen undō 活元運動, かつげんうんどう, a basic Seitai practice) and his ideas on Ki. In 1973 he published his first book, "Le Non-Faire") while waiting to open his first dojo, in Paris, L'Ecole de la Respiration (also the title of his series of books).

Tsuda Sensei passed away in Paris in 1984, but his practical philosophy is left in his work and his books and taught in several European "School of Breathing" dojos.


This film was discovered in Israel in 2014 by Ms. Carole Habib -
daughter of Pierre Holzacker - French Air France pilot who practiced Aikido with his wife Esther in France in the 1960'. Pierre and Esther Holzacker were students of the Late Tsuda Itsuo Sensei.