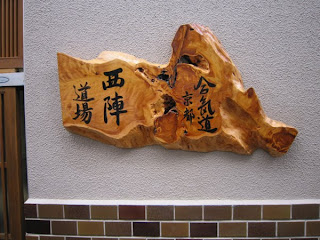 From my Kyoto Aikido diary:
We arrived on time - too early, as usual. We had about 30 minuets to kill and it was raining. The old shops on Senbon street were not open yet, so we just took an early morning slow walk good enough to wake up a bit.

The simple map took us easily through  a couple of narrow allies, and there was the dojo, righ in the heart of Nishijin district - a neighborhood, famous for its unique machiya houses belong to families that for generations over generations, produced silk products and especially the beautiful Kyoto kimono and obi. 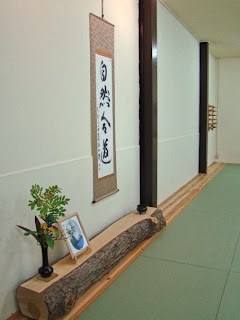 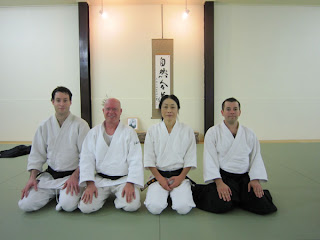 The Nishijin Aikodo dojo is one of the most beautiful dojos I ever saw. Okamoto Sensei (6th Dan Aikikai) expected our visit, as we were introduce to her by email, thanks to Lee sensei from North Valley Aikikai. After a short conversations, we changed into keikogi and hakama. Before class began, Okamoto sensei was already on the tatami mats, busy with her own warming up. Facing the dojo's shomen, she stretched, while the students gathered behind her, and slowly lined up in seiza. A minute or two before class began, the dojo was silent.  One deep bow, and another one, and then a series of thorough warming up exercises with clear and meticulous explanations. 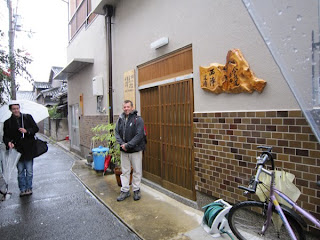 Warming-up naturally developed into training on some basic movements, concentrating on correct ukemi (response to our partner's actions). Those movements developed naturally into various basic techniques.
Sensei practiced personally with everyone. With the Japanese she spoke Japanese. With us she spoke English. With the French she spoke fluent French...

Among many things, there is one meaningful thing I especialy remember. Okamoto Sensei was very clear and precice about what she asked every one of us to do. When she came to you, you know exactly what she wants from you, and she made sure you do it. You may think this might be an obvious thing for a teacher, but for most of us, it is not easy at all to expect the student to do something he actually is able to fulfill now. When you teach, there are priorities - what to understand first, and what to learn next. Our ability is created step by step, and Okamoto sensei is gifted with the talent to recognize the exact ability and potential, each student currently has - even with first time visitors from other dojos.

Okamoto sensei's teaching and aikido, are clear, precise and impressive. I feel that although I attended just one class of her, I took with me something meaningful and precious which still echoes in my mind and is still influencing my approach to teaching aikido. I would like to express here my sincere gratitude to Okamoto Sensei.

Please do not miss an opportunity to train at Nishijin Dojo Aikido - Kyoto Aikikai, and to learn from Yoko Okamoto sensei.
Dojo web site: http://www.aikidokyoto.com/English/Eindex.html